The Republic of Macedonia is one of Europe’s best hidden treasure. The county is part Balkan, part Mediterranean and has been heavily influenced by Roman, Greek, Albanian, and Ottoman culture. It’s a stunning natural paradise with grand historic sites and ruins tucked into idyllic villages that haven’t seemed to change in centuries.

There you can find all that, plus fully modern cities. Macedonia is a wonderful representation of the Balkans with a wide variety of influences and ethnicities, modern cities and beautiful countryside, where life moves at its own unique pace. Let’s have a look at the best places to visit in Macedonia!

The largest city and the capital of North Macedonia is Skopje with a population of more than 600.000. Skopje is cultural, economic and academic centre. In the Roman period it was known under the name Skupi. In 1392, the city was conquered by the Ottoman Turks who called the town Üsküp. The town stayed under Turkish control for over 500 years, serving as the capital of pashasanjak of Üsküp and later the Vilayet of Kosovo. At that time the city was famous for its oriental architecture The city developed rapidly after World War II, but this trend was interrupted in 1963 when it was hit by a disastrous earthquake. In 1991, it became the capital city of an independent North Macedonia. Skopje also is a very attractive tourist destination with its fortress, cultural and historical monuments, archaeological sites, sport halls, caves in the canyon of the River Treska and Lake Matka

What to visit in Skopje

North Macedonia Square (the centre of the city, complete with statues of national heroes) 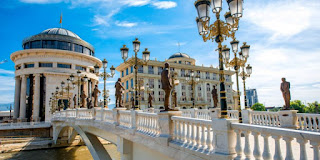 The largest tourist centre in North Macedonia, known as Jerusalem of the Balkans, is visited by thousands of tourists every year. In 1979, Ohrid and Lake Ohrid were accepted as Cultural and Natural World Heritage Sites by UNESCO. Ohrid was a centre of Slavic literacy, spirituality and culture. Kliment and Naum, the two best - known disciples of the missionary brothers Cyril and Methodious of Salonica with their arrival, Ohrid developed into a leading centre of Slavic cultural and literary activity. Kliment spent thirty years among the North Macedonia Slavs. The first Ohrid literary school was founded at his monastery church of St. Pantalejmon in Ohrid, (built in 893). The 3500 pupils who came out of this school spread the Slavic script, culture, art and church singing across several Slav lands as far as Kiev in mediaeval Russia. By the end of the 9th century and beginning of 10the century the Slavic literacy, spirituality and culture were founded. Ohrid has a deserved place in the spreading of the Slavic spirituality in Europe and across the world, especially in the process of evangelism of the Slavic Christian East. Ohrid is also famous for Ohrid pearl which is his trademark. The production of Ohrid pearl is a family secret tradition passed down one generation to another. During the summer, Ohrid has a very rich nightlife. You can attend on Ohrid festival enjoying the music of the world stars, or go to the night clubs, bars, discotheques and cafe bars.

What to visit in Ohrid ”The city of consuls’’- Bitola is the second largest city in North Macedonia, home to twelve consulates. It was known to the ancient world as Heraclea Lyncestis, a city founded by Phillip II of North Macedonia (father of Alexander the Great). Today, Bitola is real mix of old and new, where Ottoman constructions and ancient ruins intermingle with modern office buildings.

What to visit in Bitola

Shirok Sokak (pedestrian boulevard is lined with shops, cafes, and restaurants. You can see the old North Macedonian and Ottoman style houses.)

Clock-tower (The monument from 17th century. Legend says that 60.000 eggs were collected from the households and mixed in the mortar to make the building stronger)

Congress of Manastir (an academic conference held in the city of Manastir (Bitola) from November 14 to November 22, 1908, with the goal of standardizing the Albanian alphabet.) 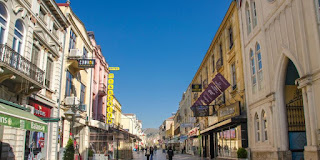 Veles, Kavadarci, Negotino, Demir Kapija are the cities producers of the best North Macedonian wine. The vineyards in the Tikvesh Region are spread on about 11.000 hectares. The wine is one of the symbols of the North Macedonian land. The great secret of the beautiful taste of the North Macedonian wines is in the sun, which in the Tikesh region gives a specific taste to every grape. North Macedonia is one of the first European countries in which the vineyard culture was nurtured. In the last ten years wine tourism In North Macedonia has seen phenomenal growth. Host of the Tikves grape picking-gathering is the city of Kavadarci, the biggest wine producer in North Macedonia and one of the bigger in the Balkan Peninsula. This traditional and tourist festival, forms part of a continuous, long and rich tradition that has been maintained in this region from the antique period, when in honour of the god of wine and grape, Dionysus, were held the ”Days of Dionysus’” 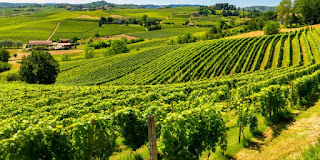